Hail Caesar!!! Rich and vibrant Playing Cards with an ANCIENT ROMAN theme. Julius Caesar, Mark Antony, Cleopatra...Randy Butterfield has been designing decks for over 5 years, including the original LUXX deck. During that time he has gone on to become one of the most respected and admired in the card industry.

The ROME Tuck Boxes have Red and Blue textured background images, and are accented with GOLD FOIL designs. Caesar's Tuck features an imperial Eagle and a customary Roman border design. Antony's Tuck features a majestic Lion and a border design with hints of Egyptian styling (symbolising Antony's final years in Egypt, with Cleopatra). Both Tucks include the Roman banner, Laurel Wreath and SPQR elements on the Back. The Top of Caesar's Tuck has the words "ALEA IACTA EST and VENI VIDI VICI" - Latin for "The die is cast" and "I came, I saw, I conquered". The Top of Antony's Tuck has the words "TARUM ET CLAMA DIMIT CANIBUS QUATIT" - Latin for "Cry havoc and let slip the dogs of war". The Back Cards for the Antony and Caesar Decks are truly two of the most unique Back Cards in the world of Playing Cards! The imagery for the Back Cards depict the deaths of Julius Caesar (Red) and Mark Antony (Blue). They are inspired by two public domain paintings and recreated in my personal style ("The Death of Julius Caesar" and "Cleopatra Captured by Roman Soldiers after the Death of Mark Antony").

The Red and Blue centre banners are at the inverse angle of the Face Cards' banners. This, and the feature of making all banner edges the same Black CMYK colour value (30C, 30M, 30Y, 100K), allows for seamless designs on the edge of a full Deck. These features remove the chance of having any marked Cards from the edges.The Cards for both Decks share the same Face Cards and will utilise Legends' awesome Classic Finish, which is a softer and slicker paper. It's more comparable to a vintage Bicycle Deck. The Court Cards for the ROME Decks depict twelve of the most influential men and women from the end of the Roman Republic. 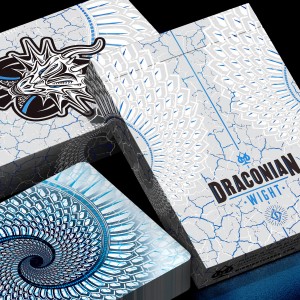