A digital reproduction by Azured Ox of the world's first published complete transformation deck in the world! This is the first in a series of 6 decks. The very first transformation deck issued by Cotta is from 1805 and is probably the most famous of all. The original illustrations were done by hand on copper plates that were manually engraved before being transferred to linen card stock. As the backs were blank, individual cards were sometimes used by the nobility as visitor or message cards.

The court cards are inspired by Schiller's play "Die Jungfrau von Orleans" ("Joan of Arc") and the central figure is depicted as the Queen of Spades, the Maid of Orleans who inspired the French army to victory, but was later burned at the stake. The court cards were designated with the words "Valet", "Dame", and "Roi": French for Jack, Queen, and King. The deck also features many other prominent figures and politicians from the time.

Printed by the US Playing Card Company, this deck features full bleed backs and is housed in a gorgeous embossed tuck. 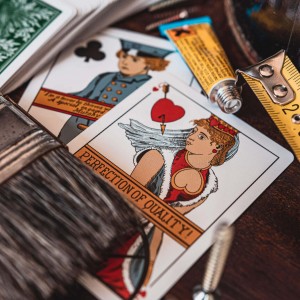 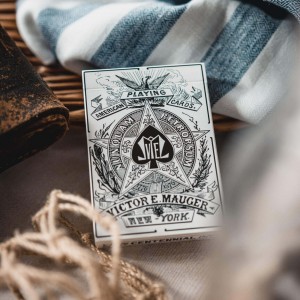