Daniel Schneider and Luke Wadey played a pivotal role in the life of this deck. Daniel helped bring the visions of the number and court cards to life and is the leader in custom courts. He proved it again with the six custom Courts in this deck. Luke took my original back design, broke it down and reimagined it, giving it depth and formatting it to an intricate grid; whilst also designing an infinite tuck box design, perfect to the style of the deck.

Paradigm is a limited edition 2500 deck run by the United States Playing Card Company on premium card stock. Each deck includes a duplicate 3 of hearts and jokers. 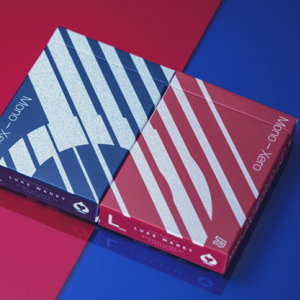