China's extraordinary history dates back to more than 5000 years and provides a rich collection of royal subjects which forms the basis of the Chao Playing Cards.

Back through Chinese history, each Chao (dynasty in Chinese) is distinguished by the name and the impact of the individuals who ruled over that period of time. These very special and unique cards pay tribute to four of the greatest and most recognised dynasties in Chinese history - Han, Tang, Ming and Qing. The illustrations and design take inspiration from not only the renowned rulers of the four Dynasties, but also from Chinese culture itself, which is visible throughout the deck.

The 4 Aces include very detailed Chinese patterns. We also added a Chinese dragon on the Ace of Spades - a symbolism of imperial power and strength. Each suit (Spades, Hearts, Clubs and Diamonds) reflects one of the four chosen dynasties (Han, Tang, Ming and Qing). The Joker cards contain 2 very important figures of historic China who are still thought of very highly, even up to this present day.

Manufactured by MPC in China, the green is a limited edition of 2500 decks and the red 1200. 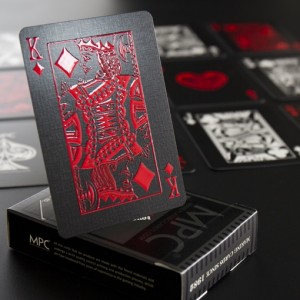